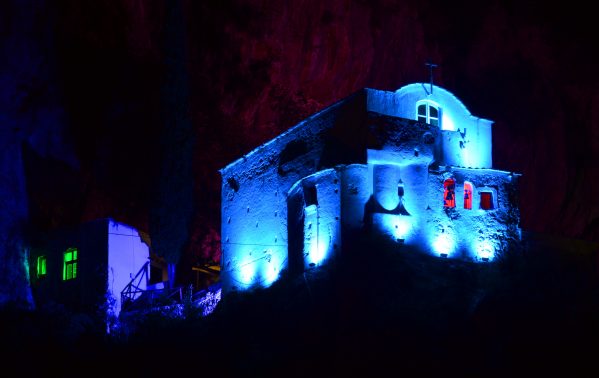 Located on a rocky spur, the church of Santa Maria del Bando offers a very striking view of the village of Atrani, its white clustered houses, the clear water sea of the Amalfi coast and the steep cliffs below. The church was probably built in the tenth century, but the first official documents about the structure date back to the twelfth century. It was built on the top of mount Aureo, where public announcements of laws and decisions of authorities (bando) used to be proclaimed from. The austere exterior walls of the small church, interrupted only by some tiny windows, hide a well preserved, Baroque styled ambience inside.  A white Madonna statue embellished by a golden halo and sparkling jewels, the paintings, niches, friezes that decorate the blue and yellow vaults, and finally the Christ on the cross, impressive in his humility, make this little church a genuine masterpiece.   Its architecture, originally marked by great simplicity and austerity, has been gradually improved over the centuries by various repairs and restorations. The renovations of the eighteenth century gave it the current  appearance typical of the Baroque style, very rich in stuccoes, moldings, cornices and decorations. A single nave, with a barrel vault, contains valuable paintings and a fresco of the XV century, depicting a miracle performed by the Virgin, which would save a man sentenced to be hanged unjustly.    Previously illuminated only on some special festive occasions, the church has been recently lit up by a permanent colour changing LED lighting system, which makes it fully visible from Atrani at night.  The designer in charge of the project, Engineer Giuseppe Mormile, in cooperation with Griven’s lighting designer Raffaele Vincelli, chose ZAPHIR RGBW as the most suitable lighting solution. ZAPHIR  RGBW is capable of delivering a remarkable performance from an extremely compact unit allowing at the same time a hassle-free installation.  Developed for refined architectural lighting, ZAPHIR RGBW relies upon a comprehensive selection of optics groups, which makes this colour changer ideal for a variety of lighting installations requiring maximum photometric flexibility. Moreover, its capacitive touchscreen display allows for a direct access to all on-board functions. Its full digital control system, obtainable from any five-channel remote DMX512 control desk, includes also stand alone functions implemented by pre-configured colour sequences and master/slave mode for multiple units synchronization. In this installation, the colour changers are all managed via Wall-TSC, a top-power, though easy-to-use, DMX controller which allows a full operation control from the village of Atrani via a dedicated smartphone application.
Installed items: 8x AL2356A Zaphir RGBW Extra Wide 1x AL1424 Wall-TSC
Credits: Designer: Engineer Giuseppe Mormile / Raffaele Vincelli Griven Griven distributor for Italy: Puraluce – Roberto Pepe, TUAIT Agency Photos: Michele Abbagnara